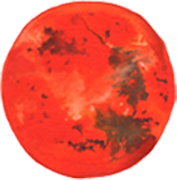 Today we’re talking about possibly the most exciting planet…the one we thought might actually sustain life, and could still do-so yet if we can build a colony there! It’s the fourth planet from the Sun - Mars!

You need to live in a dome initially but over time you could terraform Mars to look like Earth and eventually walk around outside without anything on. ... So it's a fixer-upper of a planet.

And that’s literally! If you ever saw Mars from Earth on a stargazing night, you would’ve noticed how reddish it looks, and that’s because the whole planet is full of rust! Let me explain.

The rust we may see in our everyday life is caused by iron being exposed to oxygen and turning into iron oxide which is commonly known as rust. The same thing happens on Mars. The Martian soil is full of iron oxide which gets scattered in the atmosphere and gives it its reddish look and it’s why Mars is called the red planet.

A game of Earth or Mars

Mars is one of the rocky terrestrial planets, and thus, its land geology is quite similar to that of Earth’s, they both have volcanoes, canyons, sand dunes, and polar caps, as well as many craters across the surface due to years of impacts from asteroids. It was also believed that Mars was much more like Earth in the past, with vast oceans that are now all dried out.

Mars has an atmosphere made up of carbon dioxide and nitrogen and other gases. It’s a thin atmosphere, which in turn helps heat from the Sun to escape the planet and not get trapped. Therefore, the temperature on Mars varies between cold and extremely cold!

The hottest temperature on Mars is 20ºC (70ºF) and the coldest can reach up to -153ºC Celsius (-225ºF), with occasional strong winds who’s effects may last for months.

Before you get overly excited, it’s just ice water under the polar surface! Unfortunately, Mars’ atmosphere does not support water to exist in a liquid form. However, future Mars astronauts can dig up ice water and turn it into liquid to be used in various purposes.

Mars has 2 irregularly shaped moons named Phobos, and Deimos. They were named after the sons of the Greek god of war, where Phobos means fear and Deimos means dread. Those are some pretty scary names for such small harmless moons, so small in fact that they don’t have enough gravity to form a circular shape and are often referred to as being potato-shaped!

The 2 moons are believed to be asteroids caught in the gravity of Mars, but not for long! In 50 million years, Phobos is going to crash into Mars’ surface creating marvellous rings around the planet. It should be quite a spectacle.

Mars is the most explored planet by humans so far, with 26 missions past and active having visited Mars - and that’s only the US missions. Other European, Indian and Russian missions have also taken the trip to Mars, in addition to the latest Emirates Mars Mission: the “Hope Probe.”

Robotic missions are not the only ones that are going to be visiting Mars. Actually, humans now have a chance as well through NASA’s new program “Artemis”, that plans to first put humans on the Moon by 2024 and then Mars will be the next destination.