6 Facts About The Sun 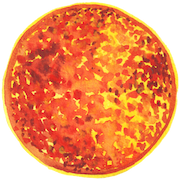 We all know the Sun – it’s the big star in the middle of our solar system whose gravity compels all the bodies around it in orbit - much like how we humans are bound to Earth’s gravity. In this small article, we learn together 6 amazing facts about the Sun.

Truth is like the sun. You can shut it out for a time, but it ain't goin' away.

The Sun is a star

We all learn from a young age that the Sun is a star, but what kind of star is the Sun? There are different types of stars: small or big, old or young, yellow or red or blue, and each type of star has a specific name.

Our Sun is called a “Yellow dwarf” star which means it has a yellow colour and is also “dwarf” in size relative to other stars in the universe. More on that later.

Not only the sun! But actually all stars in the universe produce energy.

All the stars (including our Sun) are made of gases, and the Sun is made of the two gases: hydrogen and helium. In order for the Sun to keep on shining, it is constantly using 2 hydrogen atoms and fusing them together to form a helium atom. During this process energy is released to sustain the Sun’s “life”.

The Sun’s age has a lot of zeros on it!

The story goes back to when a cloud of gases came together to form the Sun, and that was four and a half billion years ago! That is 4,500,000,000 years ago, yes nine zeros!

So is the Sun almost coming to the end of it’s bright burning lift? No way, you’ll be surprised that the Sun still has a long way to go – in fact it’s not even half way there. Scientists predict that the Sun will live for more than 6 billion years in the future before it turns into another type of star called “white dwarf”.

The sun’s temperature is a little “weird”!

The Sun is HUGE!

Remember when we said earlier that the Sun is “dwarf” in size? Well, that’s true in comparison with other stars, but when we compare the Sun to Earth and other planets in the solar system the Sun wins for sure with approximately 700,000km in radius!

The Sun is SO HUGE that it takes up 99.8% of the entire mass of the solar system. To give you a sense of how huge that is, you would need more than one million Earths to fill up the whole volume of the Sun!

The sun causes the aurora lights

We dream of traveling to the north and south poles the watch the amazing northern and southern lights also called the polar aurora. The colours come in green and blue and purple, and create a magnificent painting in the night sky.

But surprise surprise! The sun takes almost half the credit for creating these wonderful colours. The sun sends some particles with very high energy towards the Earth, and these particles interact with Earth’s atmosphere near the north and south poles creating these lights.