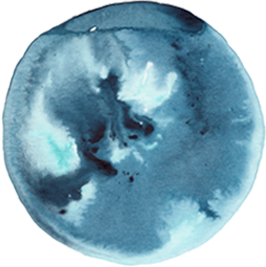 The farthest and last official planet of our Solar System, this cold ice giant lies more than 4 billion kilometers (almost 3 billion miles!) away from the Sun. Named after the Roman god of sea, we’re talking about Neptune!

"Neptune controls Pluto's orbit. Neptune is the bully of that neighborhood."

Neptune and Uranus are similar to each other in many ways;

Invisible to the naked eye

Due to the inability to observe Neptune using one’s eyes, it was discovered using mathematical calculations back in 1846, making it the first planet to be discovered in such a method and not using direct observation.

Jupiter is pretty windy too, but Neptune wins. The winds on Neptune can be so violent - as much as 3 times stronger than the winds on Jupiter with speeds reaching 2,000kmph (1,200mph)!

Pluto is further away right? Well, yes and no: sometimes Neptune gets farther out than Pluto! Dwarf planet Pluto has an elliptical oval-shaped orbit around the Sun and as a result, Pluto gets inside the orbit of Neptune for a period of 20 years in every 248, making the dwarf planet sometimes closer to the Sun than Neptune.

All the planets rotate around themselves, but not all of them rotate around a vertical axis. Earth has a rotational axis that is 23.5 degree tilted to the vertical, and Neptune is similar with a 28 degree tilt from the vertical. What’s interesting is that this results in seasons that last as long as 40 years!

And, like Uranus, Neptune’s magnetosphere is also tilted from the planet’s rotational axis by 47 degrees.

Neptune isn't often drawn with rings, but actually, all the outer gaseous planets have them. The ring system around Neptune is quite young, but what makes the planet really special, is how it’s the only planet in the Solar System with half rings. Weird.

Scientists believe that these half rings were formed in this manner not only because of Neptune’s influence, but also because of the gravitational pull of the moon “Galatea”; Neptune’s fourth innermost moon.

Neptune also has 5 full rings closer to the planet.